Controversial former NFL quarterback Colin Kaepernick, currently embroiled in legal proceedings against the league over alleged collusion by owners, has been chosen as the new face of Nike.

Kaepernick tweeted Monday afternoon he was picked to helm the esteemed shoe brand’s 30th anniversary “Just Do It” campaign — a return to the slogan that made the company famous.

The quarterback, who knows a thing or two about the sentiment, tweeted a photo of himself with the quote, “Believe in something, even if it means sacrificing everything,” with the hashtag “JustDoIt. 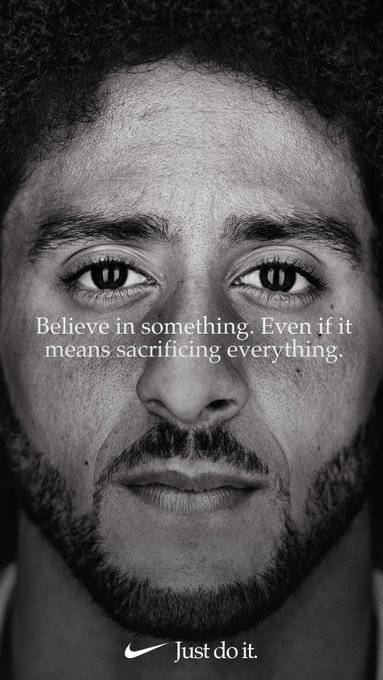 Believe in something, even if it means sacrificing everything. #JustDoIt

Kaepernick has been the face of controversy in sports since the 2016 NFL preseason when he decided initially to sit during the national anthem as a means of protesting the treatment of minorities, especially by police. After consulting with a former U.S. Army member, Nate Boyer, he decided to kneel in protest before games. He was joined by San Francisco 49ers teammate Eric Reid, as well as others around the league.

The 30-year-old started just 11 games in 2016 — one year after starting only eight in 2015 — after leading the 49ers to the Super Bowl in February 2013 and signed a $126 million contract in 2014. He opted out of his contract in 2017, though general manager John Lynch told Pro Football Talk he would’ve been released if he’d opted in.

In the fall, despite Kaepernick not being signed by any teams, President Donald Trump reignited the fury over his protests during a rally for Alabama Sen. Luther Strange.

Trump told the crowd in September 2017, “Wouldn’t you love to see one of the NFL owners, when somebody disrespects our flag, to say ‘Get that son of a b—- off the field right now?’

“You know, some owner … is going to say, ‘That guy who disrespects our flag, he’s fired,'” Trump said.

Though Trump didn’t mention Kaepernick by name — and he’s never mentioned Kaepernick on his Twitter account — he’s continued to be the focal point of criticism, mostly by conservatives.

Kaepernick, who is still unsigned, filed a grievance against the NFL saying owners colluded to keep him out of the league. Reid, who hasn’t been signed this offseason, also joined the grievance. An arbiter denied the NFL’s motion to dismiss the case last week, which paves the way for it to go to trial, Kaepernick’s lawyer Mark Geragos tweeted.

Tennis superstar Serena Williams, a fellow Nike athlete, offered support for her new stable mate after a match at the U.S. Open last week, and echoed those sentiments in a tweet Monday evening. 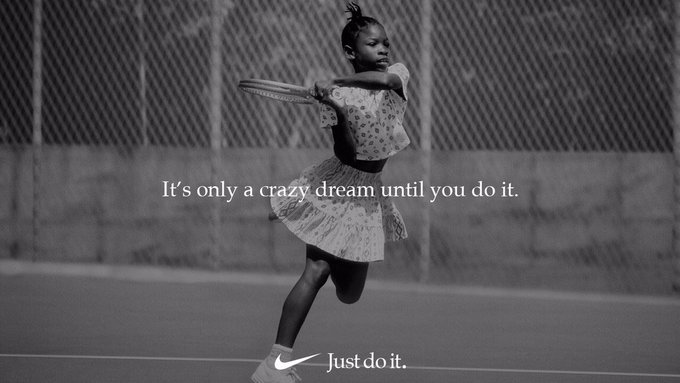 Especially proud to be a part of the Nike family today. #justdoit

Williams wasn’t the only one who tweeted support for Kaepernick on Monday. Oddly enough, former Iranian President Mahmoud Ahmadinejad actually advocated for the quarterback on his verified account. The former president, who was in the role from 2005 to 2013, is now a university professor. He sparred with the George W. Bush administration during his tenure, not to mention Iran’s Supreme Leader, Ali Khamenei.

He had nothing but praise for Kaepernick, though, and advocated him being added to an NFL roster.

The #NFL season will start this week, unfortunately once again @Kaepernick7 is not on a NFL roster. Even though he is one of the best Quarterbacks in the league.#ColinKaepernick #NFL