Was it really an accident, I think not but okaaaaaayyyyyyyy……….Millie in the City

In the wake of the horrific shooting at a Florida high school yesterday, Americans all over the country have been frantically looking for answers from Congress about what is going to be done to solve the massive issue of gun violence in the United States. So far, president Donald Trump and the Republican Party have yet to give a responsible, satisfying response and continue to ignore the issue.

While Donald Trump continues to blame mass shootings on things like “mental health” instead of relaxed gun laws, he is refusing to acknowledge the fact that blood is on his hands. Trump is (unfortunately) president now, and he is responsible for what goes on in this country if he refuses to improve things. He can no longer blame the issues America is facing on former President Barack Obama, or any of his other scapegoats.

Interestingly enough, someone else has noticed that Trump is responsible for what happened yesterday — his own son. On Thursday, Donald Trump Jr. was caught by the Twitter account “Trump Alerts” for liking a tweet that pretty much blamed his dad for the high school shooting. The tweet Trump Jr. liked was from conservative commentator Kurt Schlichter, which blamed the FBI for not being able to prevent the shooting in Florida because they were too busy investigating Trump and his insane Russian scandal. Schlichter said:

“The FBI was too busy trying to undermine the president to bother with doing it’s freaking job.” 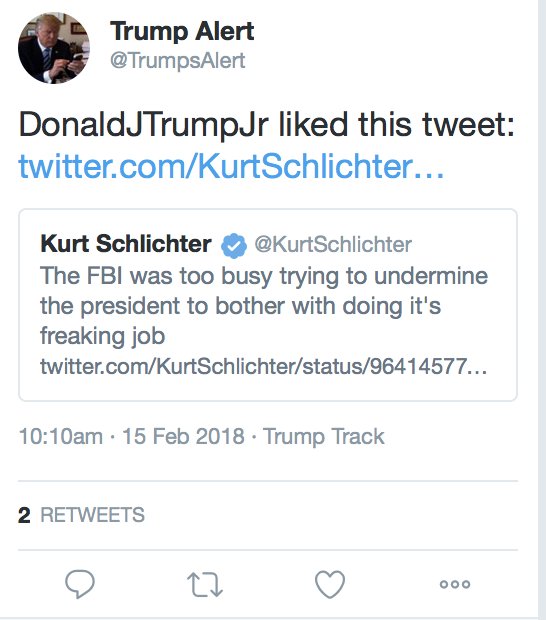 Donald Trump Jr appears to have liked a tweet blaming the FBI for being ‘too busy trying to undermine the president’ to prevent the Florida shooting.

Of course, Trump Jr. meant to target the FBI in his tweet, but was too stupid to realize that what he’d really done is blame the shooting on his father for being to sole reason the FBI was distracted. Trump is going to be p*ssed beyond belief when he sees what his son just did — especially because for once, Trump Jr. was right. His father IS partially responsible for the 17 innocent lives that were lost yesterday. This shooting could have been prevented — if only Trump and the GOP would use common sense to change gun laws.